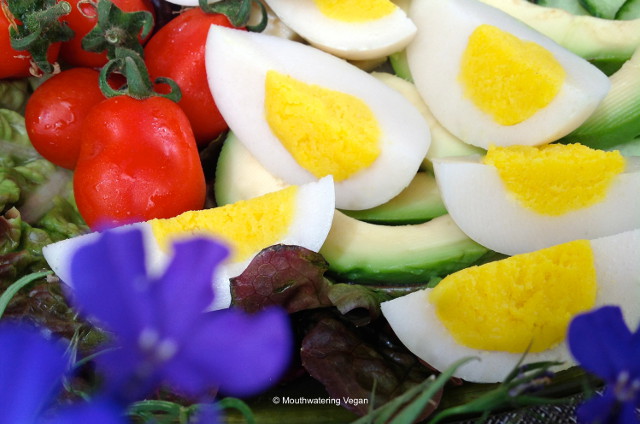 To make a scrambled egg, buy firm or extra firm tofu. Remove it from the package and squeeze out any excess water. Crumble the tofu into a mixing bowl and mash it up with salt, garlic powder, onion powder, lots of nutritional yeast, black pepper, turmeric and a dash of Bragg's Liquid Aminos sauce. If you aren't spice savvy, you can use a packet of Fantastic World Foods Tofu Scrambler Mix instead. Put everything in a skillet with assorted chopped veggies and sauté until the veggies are semi-soft and tofu is browned. 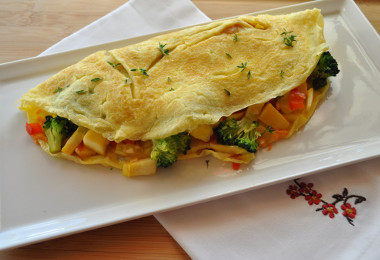 For an omelet, crumble the tofu with a food processor using the same spice combo as the scrambler. Add 2-3 tablespoons of vegan cream cheese (Tofutti or Go Veggie!), a couple pinches of brown sugar and a large dash of vegan milk. Pulse the ingredients and spread the mixture into a pie plate and bake until firm. Sauté assorted vegetables separately and place them on the tofu pie. Fold the tofu pie over the veggies and voilà, you have an omelet.

If you need an egg substitute for baked goods (eggs are an emulsifier and are never used for taste), use these emulsifying agents instead: agar, apple sauce, arrow root, bananas, corn starch, konjac (elephant yam) powder, or soaked ground flax seeds.

You can now buy JUST Egg from JUST Foods for the best-tasting mock egg on the market. All of JUST Foods's products are spectacular!

On the other hand, if you're looking for a breakfast that is quick and easy to prepare, still other companies such as Amy's, Gardein, and Sweet Earth (all illustrated just below) have produced their own plant-based egg formulations for use in a variety of ready-made breakfast foods, such as pockets, sandwiches, burritos and wraps. 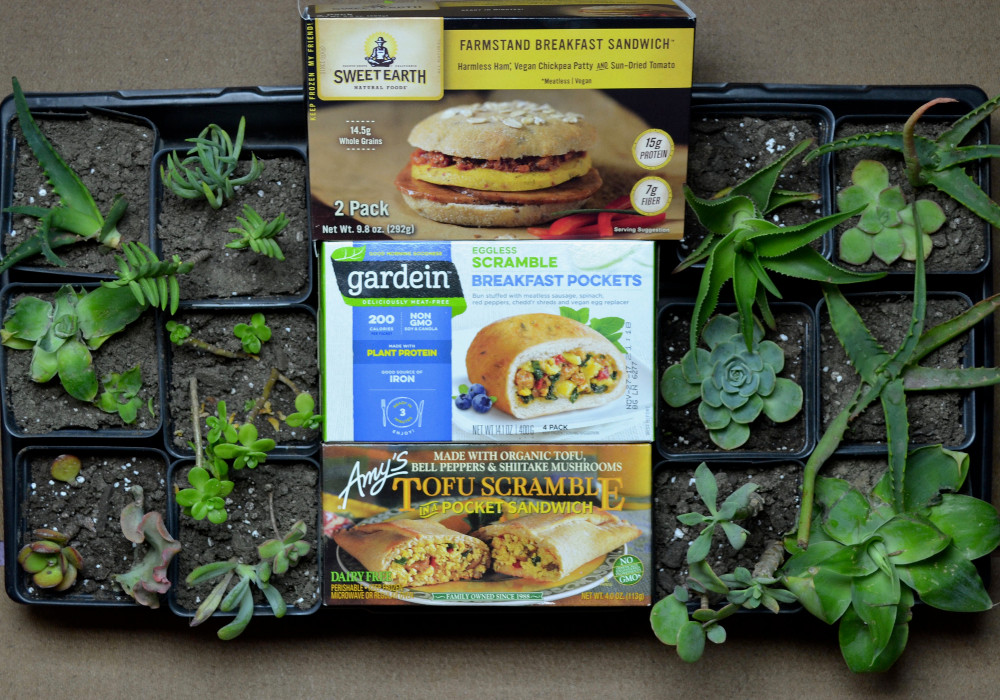 Although her egg creations have been plagiarized all over the Internet, and have made their way into at least one cookbook not of her making, vegan chef Miriam Sorrell is widely acknowledged as the first person to have created a vegan replica of a hard-boiled egg—right out of her home kitchen in Malta. Even more remarkable, in terms of appearance, texture, and taste, Miriam's creation is just about impossible to distinguish from hard-boiled chicken eggs! Miriam posts all of her culinary creations on a blog titled Mouthwatering Vegan Recipes™, and has published several all-vegan cookbooks besides. We have elected to post her recipe for the vegan hard-boiled egg below, in its entirety. But that's not all, for Miriam has not stopped with hard-boiled eggs; she also has recipes for vegan fried eggs and vegan egg salad for sandwiches and other applications! To obtain many more of her recipes for other dishes, check out our Vegan Recipes page, where we've published photos of 21 of Miriam's beautiful creations, with links to the recipes.

Place all ingredients in a food blender, and liquefy at high speed until smooth. Transfer to a small pan and heat on low heat until the mixture thickens, stirring constantly with a wooden spoon (around 2 minutes). Remove from heat, and pour into an egg mould (use hen’s egg moulds, available online). Then refrigerate for an hour or so to solidify. Makes about 6 “egg halves.” 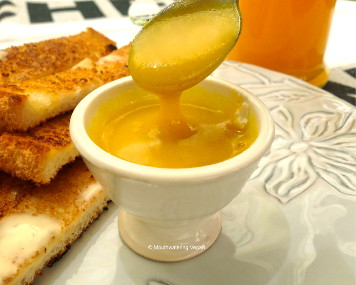 PLEASE NOTE: The ratio of water to the potato flakes or powder that you use may differ, because different brands of dried potatoes have different textures, and some may require less water. You may need to adjust the ratio slightly—i.e., you may need to add a bit more dehydrated potato or potato flakes as necessary. For future reference, make a note of the quantities that have worked for you, particularly if you're using different brands of dried potato. It's a simple detail, but worth noting.

Make up the mashed potato mix, add margarine and other ingredients, and mash until consistency resembles hard-boiled egg yolk (see the photo at the top of this page). If you are uncertain, it should be thick in consistency. Mix “yolk” mixture really well, then place in the freezer for 15 to 20 minutes. Remove from freezer, and using clean hands, form into yolk-sized balls in the palms of your hands.

If you want to make a runnier “yolk”, add some hot water to your mix in a very small bowl, and stir constantly until you reach a smooth egg yolk consistency. 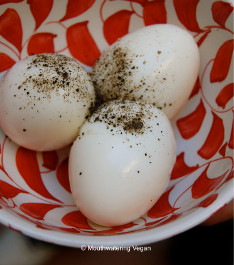 Remove your “egg white” halves from the fridge, then, using a spoon, carefully scoop out an oval shape. Fill this cavity with your “egg yolk” mix, and level with a flat knife. Then place in the fridge for a few hours until set, before serving.

To Make a “Whole Egg”

If you wish to make a “whole egg”, take two of your halves (with cavities for the yolk already scooped out). Meanwhile, having formed your yolk into an appropriately sized sphere, place it in your scooped out cavities (see above), making sure that they are levelled as much as possible, before spreading some agar paste on the faces of both white halves, and gently pressing together. The agar paste can be made using 1/2 tsp. agar powder mixed with a bit of vegan milk, heated on the stove until thickened, and allowed to cool down for a minute or so. Ensure that you brush the agar mix onto the egg halves before it completely thickens. Then refrigerate your “egg” for an hour or so before serving. (This is a labour of love—only done to impress guests! It took me a while to get the eggs above as perfect to the eye as possible.)

You don't have to say “goodbye” to fried eggs, sunny-side up, and egg salad for your sandwiches! As mentioned above, Miriam also has ethical, plant-based variants of your once-favorite egg dishes. Click each of the images below to get the recipes from Mouthwatering Vegan Recipes™. 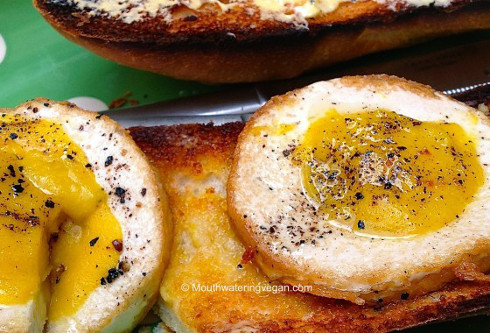 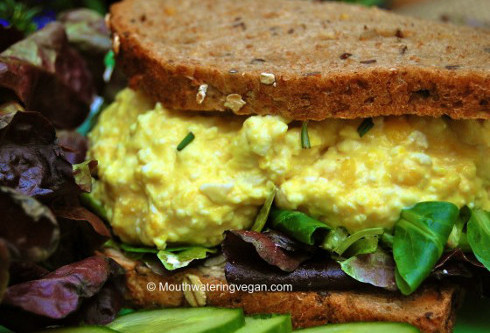