What Vegans Eat, Wear, and Use

A shopping guide to the best vegan food, clothing, body care and cosmetics 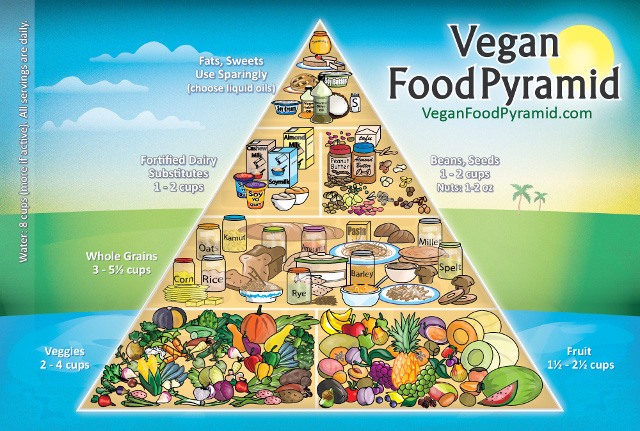 The Vegan Food Pyramid*, depicted in the image above, is a terrific resource for learning how to adopt a vegan diet in a balanced, wholesome and healthy way. (Click on that image to see a much larger version of the pyramid in a new tab.) With that being said, not everyone who is concerned about animal rights fancies him- or herself to be a natural-foods nut, or a “raw foodie” or suchlike. More to the point, even some of the most caring and careful vegans still profess a craving for meat, cheese, milk and eggs. It's little wonder, since the craving for animal foods constitutes the most widespread addiction on the planet. There’s no doubt that people eat animal products because they’re tasty. But that tastiness comes from processing and preparation! Sugar, oils, sauces and spices (mainly salt) are added to make these disgusting items palatable. Then, of course, we have to bake it, fry it, grill it, barbeque it or sauté it—add onions, tomatoes, pickles, lettuce, avocados or mushrooms—and put it between two slices of bread to make it even more appealing. If you could sink your jaws directly into a cow’s belly, do you really believe her flesh would taste like a hamburger?

Fortunately, companies like Gardein, Tofurky, Beyond Meat, So Delicious and many others, make delicious foods that are devoid of pain and suffering. With processing and preparation, chefs can easily mimic the taste of animal products! If you refuse to accept this fact, maybe this 2014 taste-test on The Today Show will convince you.

Bacon, ham, sausage, chicken, turkey, steak, tuna, hamburgers, hot dogs, milk and cheese can be made with soy, wheat, rice, hemp, beans, quinoa and other plant-based products (if you have a soy or gluten allergy, buy the soy-free or gluten-free products). Most grocery stores carry these products. If your local store isn't stocked, just ask them to bring it in. Stores exist to make money. They sell meat, cheese, milk and eggs because people buy them. When people start buying the vegan versions of meat, cheese and milk, grocers will sell those instead.

Don't forget about ethnic restaurants for great vegan selections as well. Indian, Middle Eastern, Mexican, Ethiopian and Italian restaurants serve plenty of vegan food. Chinese, Japanese, Thai, Korean and Vietnamese places let you substitute tofu or mock meats for the meat in any of their dishes. Just make sure to order them without fish/oyster sauce. For a detailed list of animal ingredients to avoid, please check out "Animal Ingredient List A-Z" from the Happy Cow website. For the best in vegan dining out, be sure to visit our newly refurbished Restaurants and Grocers page for a list of the restaurants that serve the best vegan meal options in your area. Just remember that while mock vegan items are a treat for many, you do not need them and can always keep your diet simple by consuming fruits, vegetables, nuts, seeds, grains and legumes.

For the record, some vegan foods can be very unhealthy when used to excess—especially oils, sugar, and salt. But if people want to harm THEMSELVES, I could care less because I am not the health police. I believe people have a right to kill themselves slowly with food (or drugs), but meat, dairy and egg addicts have no right to harm animals while they're harming themselves! That's not what “rights” are about. That's injustice!

It's Not Just about Your Diet

Shortly after former president Bill Clinton underwent quintuple bypass surgery to relieve massive obstructions in his coronary arteries, his physicians advised that he try a low-fat vegan diet. Clinton became widely touted by vegans for having adopted this diet, and for persevering with it (even though in recent years he has resumed eating turkey and fish on the advice of another physician). Yet even if he had avoided all animal-based foods from the get-go (can anyone really be certain that he did?), the vegans who had sung Clinton's praises were completely misguided in their enthusiasm. Why? Because (1) Clinton adopted the diet entirely for self-interested reasons having to do with what is prudent for him to do, not for reasons having to do with morality (e.g., relieving the harm done to animals, other humans, and the natural environment); and (2) despite his dietary revisionism, Clinton continued to wear woolen suits and sweaters, silk neckties, leather shoes and belts—and for all we can determine, continued to use soaps, shampoos, and other toiletries that are laced with animal fats or urine, and probably drove cars with leather interiors and kept leather-upholstered furniture in his home.

In other words, even when he wasn't eating turkey or fish, Bill Clinton was by no means a vegan in the proper sense of the term.

On the contrary, a proper vegan is one who renounces the use of all products containing traces of animal-based substances to the fullest extent possible for him or her, given the state of technology as it stands today (I'll expand on this latter point momentarily). Proper vegans not only do not eat foods that have an animal source; they also do not use body care items sourced from animals, nor do they use perfumes and cosmetics made from such sources, nor do they purchase any product of any kind that has been tested on animals. Proper vegans neither wear nor use any article made from wool, fur, silk, or leather, including shoes, belts, wallets, eyeglass cases and watchbands; they do not use comforters stuffed with goose down or duck down; and they do not keep furniture in their homes that is upholstered in leather. Vegans even refuse to take vitamins and medications encased in gel capsules, which originate with the hooves of mammals such as cows and horses.

So how do vegans get by in the world without using articles made from animal-derived materials? The answer is simple: they use articles sourced from plants exclusively, and in some cases, minerals as well. Vegan clothing is usually manufactured from cotton fibers, hemp fibers, or synthetic materials that substitute for leather, animal fur, and silk. Vegan soaps, shampoos, deodorants, makeup and other bath-related items are made entirely from plants and minerals. The article below, titled Vegan Shoes, Clothing, Body Care, and Cosmetics, provides a helpful list of websites where you can purchase cruelty-free, 100-percent vegan nonedibles online.

Before I introduce the Vegan Shopping Guide, I want to clarify an important point about the outer limits of possibility for living as a proper vegan. Many people with a ravenous appetite for meat—and a snide, snotty attitude to match their appetites—will often attempt to bait and entrap vegans as follows:

Meat-eater: “Do you drive a car, or ride a bicycle?”

Meat-eater: “Did you know that the tires on your vehicles are manufactured from stearates, which are derived from the rendered fats of animals? If you weren't aware of that before, you are now. So not only are you not a vegan; you're also a flaming hypocrite!”

This argument would be vacuous and stupid as it is if the meat-eater weren't also concerned to advance implicitly this even-more-vacuous-and-stupid argument: “Since no one in the world can completely avoid using traces of animals, we might as well go fuck-nuts, and murder, butcher and devour every cow, chicken, pig, deer and squirrel that crosses our path. Wherever we see a snake or alligator, we should kill it immediately, and make fancy cowboy boots from its skin. Shit, why not also go hunting for elephants and rhinoceros, and make aphrodisiacs, ivory statues, and piano keys from their tusks!”

Note how arguments such as this reflect the stupidity of those who, because they cannot afford to donate money to all the charities of their choice, refuse to donate to any of them. In the abstract, this reasoning is known as the fallacy of “You can't do everything to help others, so you may as well do nothing to help them!” (It's also interesting to note just how much this fuckwittery resembles the thinking of those who advance The Insipid “Killing Plants” Argument—one of the very worst defenses of meat-eating ever concocted by fools, and often repeated through ensuing generations by their foolish descendants.)

Before I list the awesome products out there, please know that soy—unless you are allergic to it—can be a great addition to your diet as it contains ALL of the amino acids, protein, calcium, iron, B vitamins, folic acid and more! Additionally, the isoflavones and phytochemicals in soy can reduce, treat and prevent diseases. Don't be fooled by all the negative publicity swirling around soy foods in recent years. This misinformation comes from the meat, egg, and dairy industries, doctors who are misguided about their food choices, and the snooty raw-food community that hypocritically consumes honey and bee pollen (see the Bees and Honey article to understand the evils of the honey industry). For a responsible analysis of the effects of soy foods on human health, read the article titled The Truth—and Falsehoods—About Soy. For a list of companies that do not use genetically modified soy and non-sustainable palm oil, see GMOs, Pesticides, and Palm Oil. If you want to add some handy vegan phone apps, get Happy Cow, VeganXpress, VeganSteven, Animal-Free (Apple devices) and Animal-Free (Android devices), or Cruelty-Free (Apple) and Cruelty-Free (Android).

Do your grocery shopping at Trader Joe's, Ralph's, Kroger, Albertson's, Acme, Publix, Giant, Harris Teeter, and other national or local chains for great selections of vegan meats and vegan dairy products. If your favorite store doesn't offer enough vegan products, don't be afraid to speak up and request these products. By the way, the SOY Veggie Slices that seem to be in every grocery store nowadays are NOT vegan. They contain casein (dairy). In order to get vegan cheese at your favorite store, please tell the store manager to bring in FOLLOW YOUR HEART, CHAO, DAIYA, TOFUTTI, GO VEGGIE!, HEIDI HO and WAYFARE cheeses (described in the Vegan Dairy Substitutes section below).

*Image courtesy of VeganFoodPyramid.com. If you click on that image, or on the link that follows, you can view a much-enlarged version in a new tab. VeganFoodPyramid.com offers an array of wallpapers in different sizes, and several foreign languages, that you can download to the desktop of your computer—as well as large posters of the pyramid.