Many companies are making it easier and easier to enjoy the taste without the pain and suffering, without the killing and bloodshed 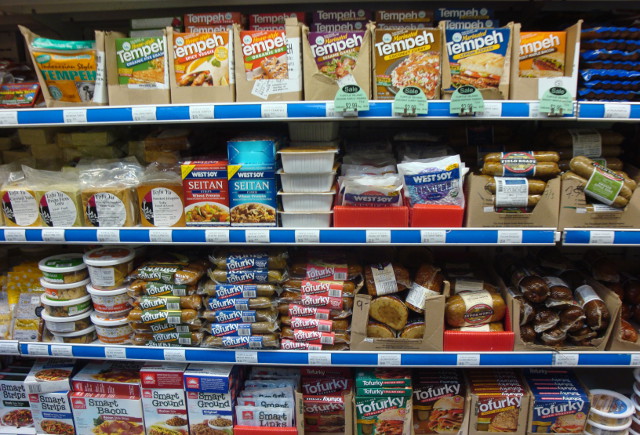 Beyond Meat is taking the world by storm! The chicken strips and beef crumbles are so meaty, they even fooled most of The Today Show crew in April 2014! And the burgers taste frighteningly just like cow-flesh. I guarantee you will love ‘em!

Anything by Sweet Earth. Their bacon is the best on the market. And the burritos are delicious! Check their site for many other vegan items as well!

The citrus sparerib cutlets by Vegetarian Plus are fantastic. This company has some other VEGAN products like tuna rolls, orange chicken, shrimp and kung pao chicken. But make sure to read the ingredient list for other Vegetarian Plus products because some of their foods are only vegetarian (containing eggs or dairy).

Any of Worthington's canned goods are wonderful, especially their dogs, chili, and skallops. However, the canned TUNO fish is horrible! Don't buy it. They used to make a frozen version of TUNO, which was utterly amazing, but they've stopped making it for some reason.

Boca vegan burgers. Boca has a huge line of veggie goods but most are only vegetarian (containing eggs or dairy).

Stuffed Celebration Roast by Field Roast Grain Meat Co. This roast is made from wheat (seitan) and it's remarkable! I've only seen this at Whole Foods so far. They also have three flavors of amazing cheese slices (see the DAIRY segment below).

Anything by Five Star Foodies. They have a FANTASTIC soy-free/gluten-free vegan burger made with artichokes!

Anything by Bahama. They're a soy-free/gluten-free vegan company that uses rice as the base. They offer five flavors of rice burgers, plus sausage and meatballs.

Food For Life has Cluckphrey chicken patties and nuggets, and Moophrey burgers. They also have nine gluten-free vegan breads.